The Spinach® Guide to Throwing a 90s Themed Party at Home

If you had birthday plans this year, going out to your favourite night club might not be the best choice.

The Spinach® Guide to Throwing a 90s Themed Party at Home

If you had birthday plans this year, going out to your favourite night club might not be the best choice. There are plenty of other ways that you can celebrate, and we found a fun idea with a hint of nostalgia. Gather your roommates or close family members and take a wild trip back to the 1990s with our Spinach® Guide to Throwing a Retro 90s Party. 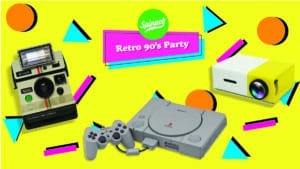 There’s no room for your flat-screen TV at this party and your smartphone is a worthy replacement. With this YG300 Mini Home Theatre Projector, you can connect your favourite devices to play the best flicks from the decade.

A picture is worth a thousand words and a Polaroid can capture almost all of them. With this nifty camera from Urban Outfitters, you can print out your memories and keep them in your hand, just remember to shake first.

There are very few video game systems that capture a time period like PlayStation. There’s blocky graphics, plugin controllers, and enough games to live in your own world. Thankfully, this classic console has been re-released and comes pre-loaded with 20 of Playstation’s most popular titles.

No party is complete without an impromptu photoshoot to show off your bling-bling. Grab one of these 90s Themed Photo Booths to capture the night’s festivities in style.

If you’re in need of a pastry that looks like it came straight out of an episode of Saved by the Bell, then you’re in luck. Pump some jam or Nutella into these DIY 90s Themed Pop-Tarts.

Nothing mixes better than vanilla and chocolate, two completely different worlds of flavour. This Seinfeld favourite is an easy-bake recipe that is sure to make your party even sweeter.

There are a million ways to eat pizza but this one tops most. This Totino’s inspired recipe is a mouthful of sauce and cheese packed on top of a bagel.

Sloppy Joes is the only meal that’s totally worth the mess, but with these sliders, you can avoid the spillage and do your best running man dance at the same time. 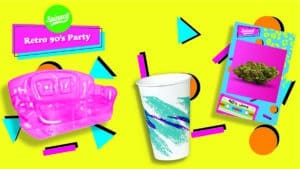 The key to having a 90s themed party is making sure your house looks like the decade. Turn the clocks back on your home décor with some rad movie posters from the most memorable 90s films.

Red is usually the colour of choice, but we figured another iconic cup would be better. These solo jazz paper cups are a party décor item that you won’t want to throw out after using.

CDs are becoming a thing of the past, so it only makes sense to make plates out of them. You’ll need them to carry all those nostalgic snacks.

You can’t capture the spirit of the times without showing off the tackiest parts. These plastic inflatable couches are the last furniture piece to make your home travel back in time.

There’s only one decade of music we love jamming out to and the 90s are on our hit list. Before you hit that electric slide, be sure to try some of our Spinach® Dancehall strain and become the life of the party.

When you Spinach With Friends, you’re already in The Circle.

When you Spinach With Friends™, you’re already in The Circle.